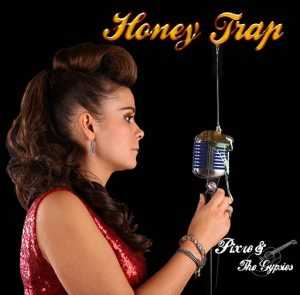 ‘Honey Trap’ – the highly acclaimed debut album by gipsy jazzers Pixie and The Gypsies (Key Signature Records) has topped the iTunes Jazz Charts in the studio’s 10th anniversary year. Producer Andy Ross, who also co-wrote several tracks on the album talks about the project and 10 years of Astar Studios.

“A lot has happened since I opened Astar in March of 2008. Firstly having designed the studio in late 2007, you never really know how a studio is going to sound until you put it to the test. In the case of Astar we set a bold challenge, because we took the decision to try use digital control room technology in a way that offered the same warmth of analogue with no compromise on sound quality whatsoever.

We wanted to get back to the acoustic quality of the great studios of the 1970s and 80s. This relied heavily upon matching the control room and live room design and technology in a totally unique and new approach. The result and total endorsement of the sound at Astar came in 2010, when the acoustic jazz album ‘Golden’ by The Kit Downes Trio was among the 12 Mercury nominations that year. This well and truly put Astar on the map and myself as a producer. In the next 5 years Astar was twice honoured at the prestigious Pro Sound Awards, firstly among the top 4 finalists for ‘Studio of The Year’ in 2013, and as ‘Best Studio’ in 2014, when I was also proud to be honoured among Europe’s TOP 50 RISING STAR PRODUCERS category.

What this meant was we had succeeded in making high end recording affordable for the independent artist and label market, and also opened up new opportunities for major labels to control the cost of recording new artists.

Interestingly among the Mercury nominees, my production of ‘Golden’ at Astar, sat alongside Paul Weller’s album ‘Wake Up The Nation’, and three years later, when I was asked to co-produce with Steve White, a cover of Style Council classic, ‘The Paris Match’ by Kristyna Myles – in order to get approval for release, the record that we recorded at Astar needed the blessing of Paul Weller, who came back with a two word quote – “Absolutely Stunning!”

Since then the studio has grown from strength to strength and no matter what we throw at the live room, from rock to jazz and even classical, the sound at Astar never lets us down. We may not be the biggest, but we have proven we are as good as the best, at a fraction of the cost!

Not only that, but we have achieved one of our original objectives that has been to engage with the emerging market sector and help unsigned acts afford to work in a top class studio with an experienced producer, something that had previously been out of reach in the past. We do so with complete integrity that allows artists to maintain full ownership of their copyright.”

At ASTAR STUDIOS our philosophy is to provide a friendly, relaxed atmosphere and perfect environment for artists to express themselves and craft timeless recordings that capture the creative spirit, skill and energy of their performance. Conceived by international writer/producer Andy Ross, Astar’s 360-degree services offer an affordable one-stop solution to take your music to market using leading industry associates with free pre-production and PR support on all EP and album packages.